Late Friday night, WBIR was the first to report about the termination of Tim Wheeler by Court Clerk Cathy Quist Shanks and then early Saturday Morning BrianHornback.Com entered the reporting stage. We posted an update yesterday. Now, the News Sentinel joins the fray.

What I find interesting in today’s News Sentinel story is that Tim Wheeler is forbidden from gathering his own personal property from the office space he was assigned by the Clerk. Is Quist Shanks hoping to find something and witholding that item or items  from Wheeler?
Quist Shanks was elected in 1998, promising to end political hiring of families and cronies. Really? How is that today?

What happened between 1998-2001 that caused Quist Shanks to issue a directive NOT to sleep on the job? How has Quist Shanks enforced violators of said directive since 2-1-2003? 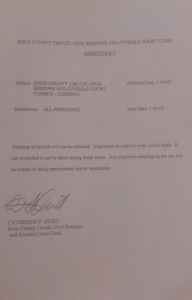