Haslam Corrected, That Is What Happens to an Establishment Status Quo Mayor

On June 5, 2010 this post has a video from the June 1, 2010 Knoxville City Council meeting where Bill Haslam maintains that citizen Ron Peabody is wrong, let’s watch it again
Well, guess what turned up in the comment section of the local liberal blog? Look it is an email from Ronald Mills of the City of Knoxville Law Department dated May 21, 2010 pointing out exactly what Mr. Peabody says at the June 1, 2010 council meeting. So, I am reminded of a saying that I heard growing up, “If you lie about the little things, you’ll lie about the big things.” But, I am sure Haslam was going by what his staff told him. That is the difference in an effective leader and an “establishment status quo mayor”. Peabody cleared. Haslam not so much. 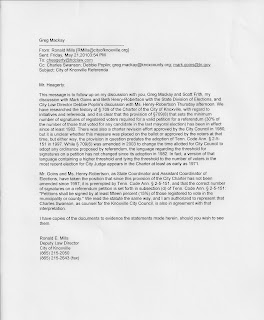