Arnett is a Special Kind of ——-

But, they opened an envelope to find the notice below. Yes, you read it right. A bill for .04 YES FOUR CENTS. FOUR RED CENTS. I offered to go to the Clerk’s office to pay the .04 and demand a paid receipt.

If this were the KUB (Knoxville Utilities Board) how would the round it? Probably down to ZERO. 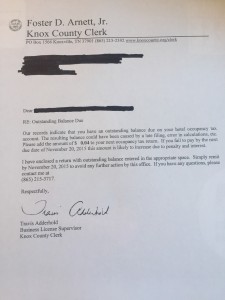 Letter from Foster Arnett’s office collecting .04 from an exceptional hotelier