A Conservatarian Manifesto – A Conversation with Charles C.W. Cooke this Wednesday in Knoxville 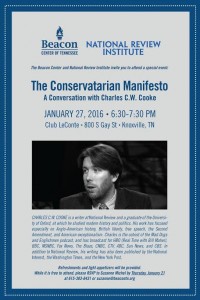 Charles C.W. Cooke is a writer at National Review and a graduate of the University of Oxford, at which he studied modern history and politics he studied modern history and politics. His work has focused especially on Anglo-American history, British liberty, free speech, the Second Amendment and American exceptionalism. Charles is the cohost of the Mad Dogg and Englishmen podcast and has broadcast for HBO (Real Time with Bill Maher), BBC, MSNBC, Fox News, The Blaze, CNBC, CTV, ABC, Sun News and CBS. In addition, to National Review, his writing has also been published by the National Interest, the Washington Times and the New York Post.