One of the expected finalist for consideration as a Republican Vice Presidential Candidate will be in Tennessee on Friday May 13, 2016. The press release from the TN Republican Party is below.

NASHVILLE, Tenn. – Over the years, the Statesmen’s Dinner has become a marquee event that brings some of the top stars of the Republican Party to Tennessee.

The 2016 Statesmen’s Dinner promises to continue that tradition. 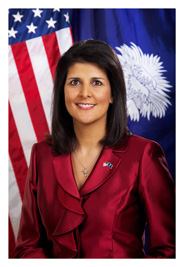 Gov. Haley, the 116th Governor of the Palmetto State, won re-election in 2014 by the largest margin of victory in 24 years for a gubernatorial candidate. During her time leading the state, she has established a well-deserved reputation as a problem solver. From landmark education and tax reforms to pursuing an agenda of opportunity for all South Carolinians, Haley has become a national figure within the GOP.

“I am thrilled to welcome Governor Haley to the Volunteer State as the keynote speaker of the 2016 Statesmen’s Dinner,” stated TNGOP Chairman Ryan Haynes. “Guests at the Statesmen’s Dinner have come to expect dynamic messengers for the Party and Governor Haley certainly fits that role. I look forward to hearing from the Governor about her solutions to unite our country and heal the divisions we’ve witnessed over the last seven years.”

Haley is routinely mentioned as a potential 2016 Vice Presidential candidate for the Republican Party.

Chairman Haynes also announced that Dr. Manny Sethi, the President of Healthy Tennessee and an Orthopaedic Trauma Surgeon at Vanderbilt University Medical Center, will serve as the Statesmen’s Dinner Chairman. In this position, Dr. Sethi will play an instrumental role in the event’s success, which is the largest fundraising event of the year for the TNGOP.

Haynes remarked, “I’m proud someone of Dr. Sethi’s stature would commit to making this year’s Statesmen’s Dinner a success. He is a leader in medicine and a leader in our Party. It is an honor to work alongside him.”

“Mainstream conservative leadership has become a hallmark of the Tennessee Republican Party,” noted Sethi. “That’s exactly the sort of principled leadership Governor Haley is known for. The 2016 Statesmen’s Dinner is going to be a phenomenal success for our Party and I am proud to be a partner in this endeavor.”

This year’s Statesmen’s Dinner will focus on honoring the legacy of the late U.S. Senator from Tennessee, Fred Thompson. The event will take place at the Music City Center in downtown Nashville.

Tickets may be purchased by visiting www.StatesmensD