On March 1 there were three school board candidates for the Fifth District seat. No candidate received 50% plus 1 and so the top two vote getters run off in a general election on August 4, 2016.

Lori Boudreaux the third candidate issued a statement on her campaign Facebook and personal Facebook pages that she is supporting Buddy Pelot and encouraging her supporters to do the same. This summer the Fifth District will choose again. 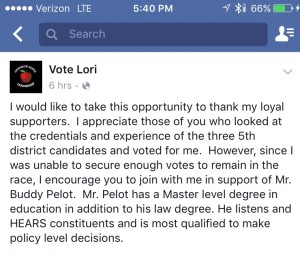