The local Fraternal Order of Police have endorsed candidates in the August 4, 2016 election. Early Voting is under way through July 30, 2016. In order to receive an endorsement you must receive 60% or greater of the vote.

In the First District, there was no endorsement in the race between Michael Covington and Evelyn Gill. Which can be perceived as a win for Covington.

In the Second District, they endorsed Michele Carringer over her Democrat opponent.

In the Fourth District, they endorsed Hugh Nystrom over his Democrat opponent.

In the Fifth District, they endorsed John Schoonmaker over Sheri Ridgeway.

In the Sixth District, no candidate received 60% of the vote. The FOP is made up of Knoxville Police and Knox County Sheriff’s Officers and there is not always agreement among competing agencies. Commissioner Brad Anders a longtime KPD guy, fell slightly short of the 60% because of turf war battle.

In the Eighth District, there was no endorsement between Former Knoxville Police Detective Don Wiser and Commission Chairman Dave Wright.

In the Ninth District, James “Brandon” Hamilton was endorsed over his opponent, Carson Dailey. 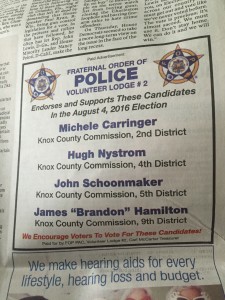