How the Democrat Party in Knox County Continues Being Irrelevant

Watching Tn This Week on Channel 6 today and some guy speaking for the Knox Countt Democrat Party (I guess Democrat Chairman Cameron Brooks is too scared of tv or maybe the studio bright lights cause him to sweat) explained that Republican Michele Carringer snatching the Democrat Second District County Commission seat with 75 more votes was a coin toss. NO, a coin toss would have been where Republican Carringer had the same number of votes as the Amy Broyles endorsed candidate. There were 3/4 of a 100 people in District Two that REJECTED the representation of Broyles and Company.

The Brooks-lite guy also said that the Democrats were competitive in District 4. Now that was break out Laugh Out Loud…..

An indication in early July that the Fourth District Democrat and her campaign were clueless was from a picture posted on her Facebook page. I saved it for a post election blog post, see it below. 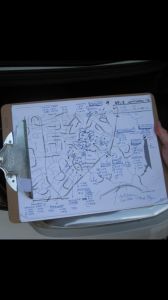 A clipboard pic with the streets and street numbers that they had knocked on one Saturday.

It was a great help for the Republican candidate to knock on those doors on Monday and Tuesday evening.

It will take some real Democrats with courage and backbone taking the wheel away from the current regime and changing the approach and strategies to ever be relevant and a threat to the GOP again.