After attending the College Republicans meeting, I dropped by for the end of the pizza kick-off party for Don Ridings. Ridings has announced his intent to be a candidate for Circuit, Chancery and Juvenile Court Clerk in 2018.

Cathy Shanks has been the clerk since first being elected in 1998. At this time, I do not know if Shanks will be a candidate for re-election. 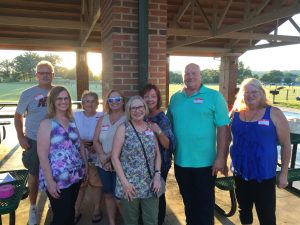 Those left at the end of Don Ridings pizza party