Why Eddie Smith is the ONLY Choice in District 13

Beginning on October 19, citizens in TN District 13 will begin casting votes in a rematch from two years ago. Two years ago the district rejected one term Gloria Johnson and chose instead Eddie Smith.

As you compare the records of the two, there is  only one choice. That choice is Eddie Smith, he has proven himself to be an effective Representative of District 13. He authored and passed legislation to put teeth in penalties for school bus drivers texting while driving. He worked with Fulton High students in crafting and passing a Memorial resolution for Zavian Dobson. Proof that he is public servant that will step out of the way to help educate our youth. Unlike a former teacher that gives up and quits on her students just before the state required exam.

When District 13 votes it is imperative to elect someone with a track record of representing and being effective for the district and that is Smith.

The Democrats want Johnson back because her only role is assisting Mike Stewart and Craig Fitzhugh to be polarizing, attacking Governor Haslam, the Republican majority. But when it comes time to casting a vote, she will do what she did several times from 2012-2014 sit and not cast a vote, like on Workman’s compensation. Johnson failures are great and could be comparable to simply failing to pass gas in the house chamber. District 13 needs the state and because of that they must elect Eddie Smith. 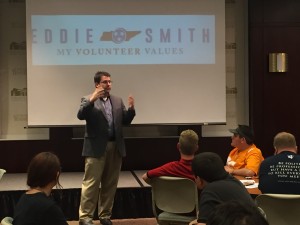