A Message for you Few Brian Hornback Haters

For those few haters of Brian Hornback that like to think Gov. Bill Haslam and I don’t get along, you are WRONG. He and I may not always agree on certain issues. 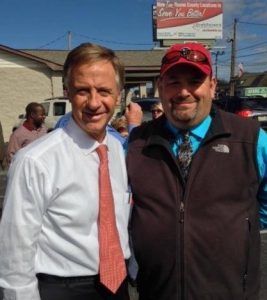 Gov. Haslam and I outside the Handee Burger in Kingston, TN in October 2012.

Two years ago we supported State Rep. Kent Calfee as we are doing again this year. Also, this year he and I agree on Eddie Smith for State Representative as a matter of fact on October 14 we shared a laugh about both of us being featured in a TV ad for Smith and what a travesty it would be if Smith’s opponent were to win. That ad is still airing for the few haters that thought it got pulled.