Anyone that remembers May 2001 and what became the 2001 Summer of Chanda will recall the disappearance of Chandra Levy and the focus on Congressman Condit. What is revealed 15 years later is that EVERY law enforcement agency that touched the case in 2001 made errors, omissions and just made up crap. The leaks from the agencies was the fuel that allowed a gotcha media to continued to repeat the errors, commissions and fictional accounts.

What this book demonstrates is the strength of the Condit family, the Congressman’s wife, his son Chad and daughter Cadee and even a story about Chad’s son (the Congressman’s grandson) Chad facing off with Geraldo Rivera on camera, Cadee accompanying her dad in court and the wife standing by her husband when the belief of what he said is not what he said. The Congressman NEVER wavered, he may have bent but he NEVER caved.

Condit Attorney Lin Wood quote from the October 27, 2016 Dr. Phil Show, “The shout of guilt is never overcome by the whisper of innocence” That is true in EVERY litigation filed. The first one out whether bogus or not gets the medias attention, even after the court rules.

For the political or true crime person on your Christmas list, this is a must buy. Here is the link to purchase. 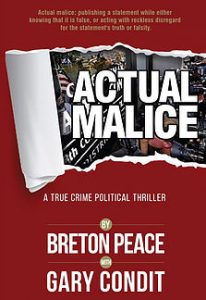