Who Is Gonna Lead the Knox County Republican Party?

Well 2017 is one of those every other years where the Knox County Republican Party reorganizes and selects a Chair and First Vice Chair.

It’s hard to believe that it’s been 12 years since I was elected to serve. Of course I started in 2005, then the TN Supreme Court said in 2006 a few of our candidates were not eligible to serve, we still got them elected even with a slate of write-ins called an orange ballot. I had promised my family one term so in March 2007, I did not seek election. The party selected Irene McCrary, who had served along with me as First Vice Chair and I became Immediate Past Chair for two years. In addition, to getting good people elected, during my term, we sent Bob Corker to the United States Senate as the only Republican Freshman Senator in the 2006 class. As I tell people being Chairman was more enjoyable than my term on the School Board. 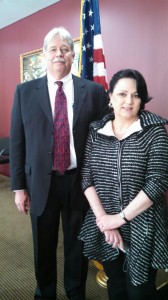 So, now back to 2017. Chairman Buddy Burkhardt is planning to be a 2018 candidate for Knox County Mayor so he will forgo another term as Chairman. During the fall Trump/Pence campaign I talked to Suzanne Dewar, the current First Vice Chair about taking the Chair position. In my humble opinion, she is not fond of the thought of dealing with the media on a consistent basis. Of course in view of President Trump, she could just tweet it all. But I digress. Dewar served as the party’s Office Manager as we operated a full time office operation. The office remained open until it was closed sometime in 2014. 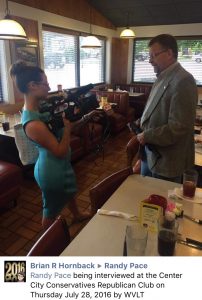 Now, Randy Pace is definitely going to seek and if selected will serve as Chairman of the Knox County Republican Party. Pace has been in town for about two years. He moved here when his wife’s employment brought her to the TN Valley. Pace has served as Mayor of the Township of Medford, New Jersey. So, political involvement is nothing new to him. In fact, from a Township position, he may be able to help the party break into Democrat stronghold of the City of Knoxville city council. His main goal is to engage active involvement. Pace has been active in attending the various clubs and as this writer serves as the President of Center City Conservatives Republican Club, he authored a letter that the News Sentinel published encouraging people to join the Center City Conservatives at our Trump Inaugurational Chili Supper on January 20. The cost is $15 and to secure tickets email cccrc.knox@gamil.com 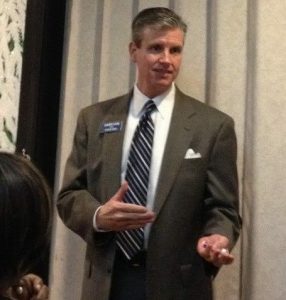 Also, Gary Loe former 2012 Republican State Representative candidate is rumored to be considering the position. Loe has continued to be engaged in party functions. Loe serves in leadership with the West Knox Republican Club and attends the other clubs as his schedule permits. Loe is a former news reporter and assists candidates in media campaigns. 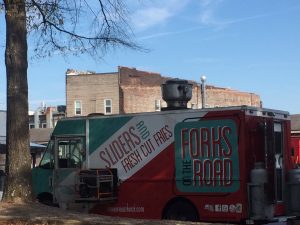 My favorite is Zoe and her owner John Gabriel. Excellent sliders and fries

Former 2013 Knox County Republican Party Chairman candidate John Gabriel is a potential candidate in 2017. His small business Forks on the Road actively takes most of his time.

The party rules are that the First Vice Chair must be of the opposite sex of the Chair. So, I am hoping that Suzanne Dewar can be compelled to serve with the next male Chairman.