The Censure of Lumpy is Because Tony is Skeered 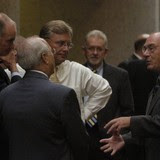 The Knox County Commission spent one hour and fifty five minutes in debating the censure of Lumpy. Instead of it really being the censure of lumpy, it was really “Tony is skeered and wants revenge.” Commissioner Tony Norman presented his case that he is skeered of Lumpy from South Knoxville and Karns meetings. Norman presented his “evidence” and one witness. Lumpy presented his case and three witnesses via videotape. In the video testimony, references were made to Norman’s smirk. Every time that smirk came across Norman’s face.
After some debate, a citizen that has appeared at Board of Zoning Appeals concerning a landscape business and has had some previous public disagreements with Commissioner Lambert appeared and testified against Lumpy. Thus bringing Norman’s witnesses to two. Then Chairman Strickland recognized the first lady again. So, instead of the five minute rule per citizen, Chairman Strickland allowed one lady to speak ten minutes.

So, the bottom line is this. Tank, you need to man-up. Tony, you need to grow up. Finally, Lumpy, quit the drama class, you already got an A.

By the way, Norman in presenting the evidence said that he would not make a motion because that would be inappropriate. He then seconded Mark Harmon’s motion, which makes Norman a liar. Norman also voted on the censure.