I started Tuesday morning at Sami’s Café at The Shops of Franklin Square with breakfast with Shelby County District Attorney General Bill Gibbons. Joining us for breakfast was Gibbons son, Will and Gibbons for Governor Staffer Adam Nickas. It was an enjoyable meeting for me in getting to know Mr. Gibbons. He does not support a state income tax. He is an advocate for opening up charter schools to local control and direction. He is a law and order kind of guy, in that he will work to revise the sentencing guidelines, keeping serious offenders in prison. He will also create a professional THP.

He has assembled an impressive campaign team and is continuing to build a statewide campaign network to get his message across the state.

Tonight, he introduced himself the members of the Knox County Republican Party as he was one of four speakers at the 2009 Lincoln Day Dinner. He is a solid candidate and a solid choice for the Republican voting public. 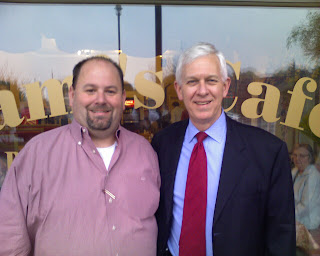