Last night at the Young Professionals City Council Candidate Forum Candidate for Knox County Circuit Court Clerk Charlie Susano told me that he thought I would write more about my thoughts on the TN GOP bylaw changes and Monday nights meeting. This is too all my readers, even the haters that stalk and copy everything I do. 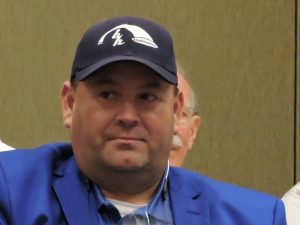 First, please remember this Monday post about the Las Vegas shootings. In that personal posting, I wrote “So forgive me if I am deep in thought for my son, our friends and don’t seem my typical self. This one is gonna wear on me for a while.”

While at the meeting Monday night, I was covering the event for BrianHornback.Com I was video recording the event. The last thing I was going to do was what the former Knox News Sentinel employee did which was when she inserted herself in the story by challenging Julia Hurley and giving her opinion. The former employee went from covering the news to trying to be the news.

Also, this was not new news, six years ago I contacted the six SEC members that represent Knox County on my position about having a CLOSED primary. This was not new news. I did find it comical and concerning that a former Knox County Republican Chair that left the Chairman position in the first quarter of 2015 was so upset as the SEC has been debating this issue since 2010.

How can specific candidates think this action of changing the bylaws has targeted them? Because in 2010, they apparently had no plans to vote, be involved in Republican politics or even think about running for office in 2018.

Most disturbing was the action and reaction of State Senator Rick Briggs. He came in late, left early, he did not know who TN Republican Party Chairman Scott Golden (who was elected in December 2016) was. He did not have all the information about the changes. I certainly hope that he does not enter the surgery room in the same manner. Briggs is a heart surgeon.

This whole issue is a party decision, not a public decision. If you want to join an organization like the Lions Club, Kiwanis, Optimist or any other organization, there are requirements for membership. To be an officer in the organization you must have been committed and demonstrated through your work that you should be one to lead the organization. In the same manner, it seems to me that if you want to be one of the Republican Party’s Elected Officials, you need to have demonstrated something more than an infatuation with a position or a paycheck.

Now, that is my say.

So, I return to my real world and this turf war about Republican bonafides ain’t that important to me. But as I have been committed to you readers for 13 years, I deliver my opinion ALWAYS based on truth. So there you have it, friends and haters.