Who Are the Democratic Socialist of America Knoxville and Is That What a Representative Government Wants? 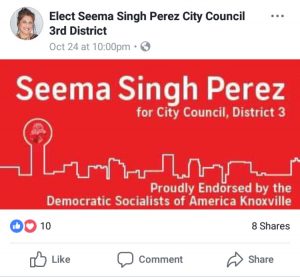 I don’t know anything about the group BUT the word Socialist normally means Russian and while it’s hard to imagine why Russia was involved in our National 2016 Election, why would they now be interested in a 2017 Knoxville, TN City Council election or two?