This morning at Kingston Pike and Northshore Drive the Matlock for Congress team were human billboarding.

I am told a Nashville based alternative journalist (a Nashville based alternative journalist has emailed that its tweet wasn’t deleted, that it is because I am blocked from it’s twitter account. I didn’t name the journalist and while said journalist likes to use colorful words in it’s email. I will provide this update. In the original post, I said I was told, meaning the information was NOT confirmed. I am pleased that the journalist along with the hundreds of thousands continue coming to BrianHornback.Com every day, month. Obviously in this attempt hoping to see it’s name. Still hasn’t happened) tweeted Tyler Whetstone that the Matlock team were a block from the campaign office of the County Mayor. As if there’s a free space for the senitive types. Apparently after a Matlock team member RT’d with AND…the Nashvillian deleleted the tweet. 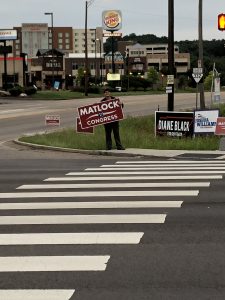 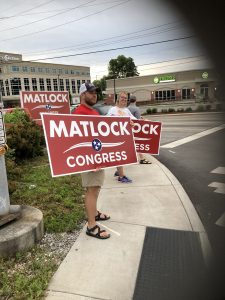 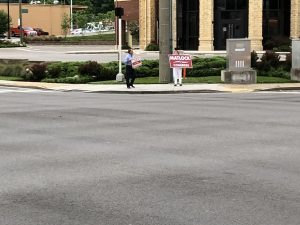