In a statement that highlights the bi-partisan leadership of Representative Smith, Former Representative Tindell announced his support of Smith over his democrat opponent, Gloria Johnson.
In a statement from Former Representative Tindell, he said, “I have continued to be involved in the Legislature since retiring from service, and I can tell you that the 13th district has a seat at the table and is well represented by Representative Smith. Eddie is effective, smart, and hard working. He has the best interests of Tennessee and the 13th district at heart. I can think of no better person to serve at this time, and I look forward to even better things to come for our state and community.”
In response to this important endorsement, Representative Smith stated, “I am honored to receive the endorsements of community leaders, such as Former Representative Tindell. I am proud that we are delivering real results for Knoxville, including strengthening our schools, growing our local economy, and improving healthcare.”
Eddie Smith represents House District 13 and he is currently seeking re-election. Eddie is a common-sense republican focused on our schools, our jobs, and our families. You can early vote for Eddie between now and Nov. 1. Election day is Tuesday, November 6th. To learn more about Eddie Smith and his campaign, visit here 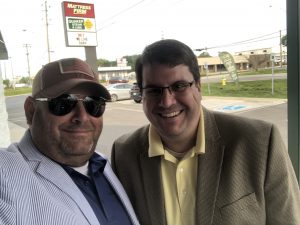 State Rep. Eddie Smith was one of the Speakers