Lunch at Sami’s Cafe, it was a properly noticed meeting between County Commissioners Larsen Jay and John Schoonmaker. It was a table for six. Commissioner Carson Dailey, School Board Member Patty Bounds, a citizen and myself.

Commissioner Dailey was unable to make it because of an earlier meeting that went over. Bounds had to cancel due to a conflict, so it was four of us and then about 30 minutes into a 90 minute lunch, Dan Andrews came in. 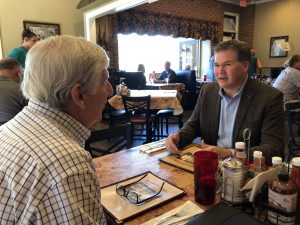 Schoonmaker and Jay at the beginning of the lunch.

The meeting started out with Jay asking about updates of what is happening in the Fifth District, Southwest Knox County. They discussed the operation of the Finance Committee, which Schoonmaker bested Jay out of the Committee Chairman position back in September.

Then after the lunch and about an hour in, the conversation turned to what everyone knew was the drawing card and that was the move of the Knox County Schools Central Office out of the Andrew Johnson Building to the TVA East Tower.

It was a pretty good back and forth, with Schoonmaker having a lot of questions Jay with a the details are not that important. Jay actually saying the logistics is just the “minutiae“ (precise details; small or trifling matters) Schoonmaker said that he heard the contract (which has not been made available yet) is rumored to be 21 individual contracts. Jay said “yeah, but there will be summary pages.” In my mind, I immediately heard Nancy Pelosi say, “we must pass the bill before we can read it”

Jay wants to accept dollar amounts as fact from Knox County Finance, Public Building Authority, Potential Architects, Real Estate Developers as fact. I am sorry but in modern day history of Knox County NOT one project has come in on or under budget.

Northshore Elementary was built and an entire classroom had to be rebuilt due to a sink hole that swallowed a wall. Just to name two incidents. There is so much in the almost 31 minute conversation between Schoonmaker and Jay that I will disseminate in future posts. But the hard “car salesman” approach by Jay and others should be enough to slow this thing down. It’s already been two years, the first of any details were not made public till September 11, 2019 and the push is for a vote in October.

Since the September 11 meeting, it’s been revealed that the University of Tennessee wants to sublease from Knox County the top 6 floors of the TVA East Tower. Why doesn’t UT lease and allow Knox County to sublease? Why is Knox County moving into office space that’s set empty for over 15 years? Why is Interim UT President Randy Boyd calling County Commissioners? What is he saying and how is he saying it? The public has a right to know. It is our money. 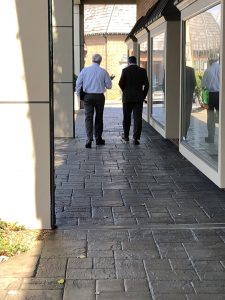 Schoonmaker and Jay walking to their cars 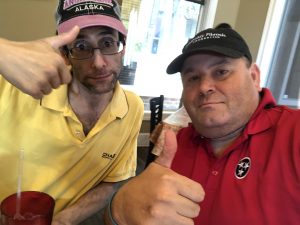 Dan Andrews and I at the other end of the table