The TVA East Tower Puzzle is a Puzzle Piece at a Time, is it a piece of another puzzle?

The desire to rescue TVA the Federal Government agency from an empty Tower East in Downtown Knoxville has been going on for 18 years according to this story from the daily paper. The three paragraphs  from the story are, Mike Arms, a political strategist who used to serve as chief of staff to former Mayor Mike Ragsdale, helped broker the meeting. He said Johnson told Jacobs he’d love to have the school system as a neighbor.

Arms said the county tried to sell the AJ Building nearly 15 years ago during Ragsdale’s tenure, but commission balked at the idea.

“The fact that one of the towers is now available, it looks like all the stars are aligning and why everyone’s not excited about doing this I’m not sure,” he said.

Glenn Jacobs and Justin Biggs were the unexpected winners of the Republican primaries for Knox County Mayor and Knox County Commission at Large Seat 11 on May 1, 2018. Unexpected by 99% of the politically active in Knox County. BUT, not by #TheMegaBullhornofTruth

On the same day of Jacobs and Biggs REPUBLICAN wins, was the date to RSVP for a May 10, 2018 coffee with the TVA Board in Muscle Shoals, Alabama. Who was the organizer of  the coffee for the entity hosting the coffee? Mike Arms!

Now, am I opining that all appearances are as they appear? NO.

Do I find it ironic the names, circumstances and timelines kinda line up? Maybe.

But, maybe in an era of transparency, folks can reveal any connections.

However, I am just an internet blogger. This is what I do. I show the information I locate as part of helping investigative journalism. 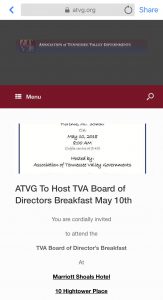 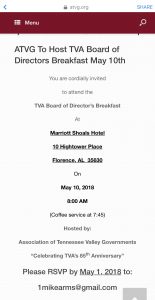