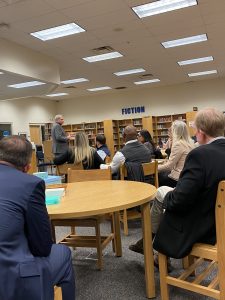 The most interesting revelation is when Whitehead talked about a brief time when he was NOT in the Property Assessors Office. He worked with citizens and companies to appeal assessments on their properties and was successful on every one of them, that he assisted to be appealed. One of those assessments that he assisted with, was his opponents property.

Whitehead has the highest certification in the State of Tennessee for an Assessor. The office has received an award that has recognized it for its operation and there have been no audit findings against the office.

Additionally, (Whitehead didn’t mention this) but this year the Knox County Chief Deputy Jackie Raley of the Property Assessors Office was awarded the Chief Deputy of the Year by the TN Assessors Associations. Read my previous story, here.

More to come on this race, as the campaign progresses, it has only just begun.