about that TVA East Tower Lease …

Since September 11, 2019 when the Knox County School Board and Knox County Commission met to be informed about the TVA East Tower and sell of the Andrew Johnson Building. I have NOT been a fan.

My first objection is the idea of a Federal government leasing to a County government that sub leases to a State government, I just don’t like the shell game of tax payer dollars, BUT hey it isn’t a deal breaker.

My second and primary objection is selling the Andrew Johnson Building for an amount that is far below the current market value. Additionally, I believe there is a County Ordinance that says all surplus property must be auctioned.

My third objection is the Public Building Authority. That is an objection that has been there since my service on the Knox County School Board from 2000-2004, that isn’t a deal breaker on this deal.

When at last weeks Special Called Meeting by Knox County Mayor Glenn Jacobs it was announced that they are asking Commission to vote on the TVA Tower lease in January and the sale of the AJ Building in February. I asked the question, if the lease happens and the sale doesn’t what happens. I was told that the Mayor answered that question on Monday, the county will move other offices there.

So, my primary objection is the schools moving out of the AJ Building to a more intensely secured Federal building. If the county wants to move other offices there other than schools like I proposed here on October 5, 2019, FINE, then roll with it.

the documents, that will bind the Knox County taxpayers for 40 years to th TVA East Tower

I believe I have provided superb coverage, being the first media to expose the 20 plus contracts among a few other first. The big full time media never credit me for the work I do and the many breaks I get that they do not. BUT HEY I KNOW, THEY KNOW and the PEOPLE KNOW the TRUTH! 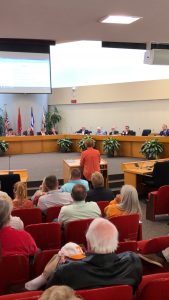