I have written about a few of the applicants for Knoxville City Council First District. Last week I attended the Ribbon Cutting and Official opening of the Shoney’s on Chapman Highway. While there I met Janice Tocher, another applicant for the position that Stephanie Welch is vacating. 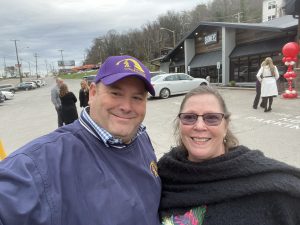 Janice Tocher and I at the newly renovated Shoney’s on Chapman Highway.

Tocher has been actively involved in South Knoxville throughout the years her husband and she have lived here. From co-founding several community-centric organizations, to participating in the public process for 1st District projects and Knoxville | Knox County Planning community meetings, Tocher feels she has a good understanding of the needs of the 1st District.
Tocher says that she bringS experience and thoughtful decision-making to the position of city council as well as a strong desire to engage the community as the 1st District and the City of Knoxville continue to evolve.
Some of her stated qualifications include: