At Monday’s meeting of the Knox County Election Commission, Cliff Rodgers announced his resignation as Knox County Administrator of Elections, effective May 30, 2020. 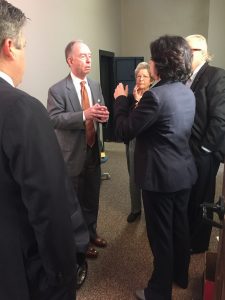 Mancini and two (assumed) democrat observers ask Cliff Rodgers to go back trough and double check all ballots in District 13 have been pulled. Rodgers agreed. Roberto observes conversation. (From 2016, I believe)

Rodgers in part said, “As of May 2nd, I will have been AOE for nine (9) years. This is probably much longer than I thought that I would be doing this. I have now administrated twenty-four (24) elections. I have spent three hundred and thirty (330) days of my life dealing with E/V issues. That’s almost an entire year of active election time during E/V and on E/D—three hundred and fifty-four (354) to be exact. At any rate, I truly felt called to serve then and I feel equally called to step aside now.

I will also be sixty-seven (67) this summer. Consequently, I can tell you today that I simply do not have the energy, the 24/7 focus, and the passion to deal with another highly polarized Presidential election. I’m tired of not having enough time for my family or, quite frankly, much of anything else. I’m tired of waking up at night in a cold sweat and in the mornings all stressed out—and that was well before all of the Coronavirus concerns. And don’t get me wrong, this job has been a real blessing and even at times a joy—I have met so many wonderful and dedicated citizens of this county who serve as underpaid election officials—folks that I would have never have otherwise met in my West Knoxville bubble. It has been an honor and privilege to serve the voters—truly–and the same holds true with my staff, my machine techs, and most certainly each of you. So, a sincere and heartfelt “Thank You” to each of you for allowing me to serve for these nine (9) years.

Moreover, I would also NOT be leaving if I had any loose ends to tie up. I did not want to leave before a new voting system was well inside the pipeline. I also wanted to complete all of my responses to the subpoena served on me by the LWV and the Tennessee Black Voters Project. And both of those matters are, I believe, under control. More importantly, I would not be leaving if there was no one to fill my shoes to navigate a Presidential Election in the middle of the Coronavirus crisis. But there is—Chris Davis….”

I will post more later about Rodgers as we get closer to his date of retirement. He is the exception to most government employees. I hate to see him go, BUT, the Election Commission would be well served to move Davis into the Administrator position.