Dr. Buchanan is Operating in Violation of Open Meeting Law, Was Advised and Willfully Ignored Counsel

David Buuck, Senior Deputy Knox County Law Director has responded and Dr. Martha Buchanan is violating the TN Open Meetings Law and was advised to NOT do it and she said she is operating as the Governor more or less.

Mr. Hornback, Thank you for your inquiry.  At the county commission meeting last night, Dr. Buchanan, in her capacity as Knox County Public Health Director, was asked by a county commissioner what her intent was with regard to opening wedding and other venues.  Her response was that the next step had not yet been decided.  She said that the Knoxville-Knox County Reopening Task Force was meeting on Tuesday (today the 19th) to come up with the next step and that the Task Force would announce the next steps to the citizens on Thursday.   The Committee was convened by the Health Director in her capacity as the sole governmental entity with policy making authority regarding closing of businesses during a pandemic.

This statement about the meeting to develop policy, triggered a query as to whether the meeting had been publicly noticed under the Open Meetings law which, as you know,  states that it is “… the policy of this state that the formation of public policy and decisions is public business and shall not be conducted in secret.”

It turns out there was no notice.

I have attached the email string of public records emails regarding the issue. 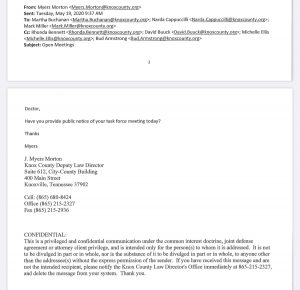 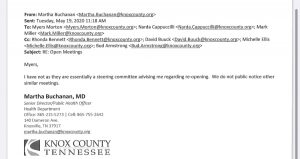 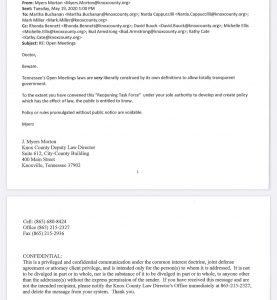 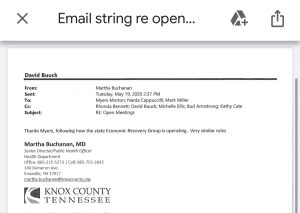 My understanding is Buchanan changed the meeting from ZOOM to in person, still denying myself and one other media entity from covering the meeting.

Time for someone to remove her UNTIL an investigation into this state law violation is investigated.