This site is about giving everyone on the ballot a shot. Even if they do not advertise. I have been a candidate, I know how difficult it is for the underdog to get the message out, so I try.

Today, I learned that the Knox County Education Association Political Action Committee stacked the deck for the endorsement of Hannah Kirby in the Knox County Board of Education Sixth District Race. This does not make me happy and could cause me to reconsider my approach.

Here is the story, there are three candidates. Rob Gray, Betsy Henderson and Kirby. Rob Gray went to Facebook to explain today 10/15 that his letter was sent on October 7 via delivery notification, had to RSVP by October 9 for an interview on October 10 for an endorsement consideration. He received the invite yesterday October 14.

I contacted Henderson, she informs me that the letter was dated October 6, mailed on October 7 and it arrived on Oct 9. You had to RSVP by the 9th and the interviews were on Saturday Oct 10. She did not participate. 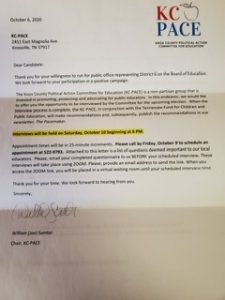 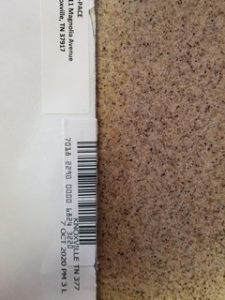 social media post, statement is untrue, Gray and Henderson were NOT interviewed for their positions. Gray in an interview with me today said, his position on vouchers is, fix the schools so vouchers are not sought. That is NOT an endorsement of vouchers