This evening, I received a statement from Bryan Hair, Chief of Staff to Knox County Mayor Glenn Jacobs.

Before I share his statement, let me say, that when I was Chairman of the Knox County Republican Party from 2005-2007, I first met Hair as he coordinated and led the successful Bob Corker 2006 campaign in Knox County. He and I reconnected a year before the 2018 Knox County Mayor’s Republican Primary and General Election.

His wife and children are members of the church where my family and I have been a members since the mid 1990’s. I believe and have witnessed Hair to be a man of integrity.

Being in Government is not anything like the business world and being a husband, father and steward of the taxpayers assets sometimes become complicated. We all learn from lapses of judgement and we become better tomorrow and in the future.

Here is his statement,

“Towards the end of May, my wife broke her foot and I reached out to Parks & Rec to see if they had a cart I could borrow that was not being used. I was aware they had recently purchased carts for both Recreation and to use at the Festival of Lights to allow constituents that were unable to walk the paths, the ability to ride. I was told that they were not being used at the time since recreation was shutdown due to Covid so I borrowed the cart and used it through the summer until her foot healed and then returned it to Parks & Rec.

This was not only a mistake on my part, but a lapse in judgment. It was not wise for me to borrow something that belongs to the citizens of Knox County, and for that, I’m deeply sorry.” 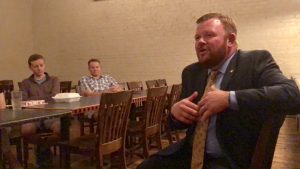