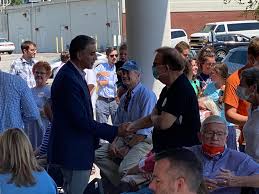 Dr. Manny and Mike Prince at a July 2020 Knoxville event

I last saw Mike at a Dr. Manny Sethi event in July.

Prince always was cheerful and had a smile. He was a hard worker professionally and within his civic and political activity.

He and I shared the fraternal status as former Knox County Republican Party Chairmen. He was one of the good guys. His time on the Knox County School Board was the late 1980’s and my time was 2000-2004. So our most common connection was GOP politics. Prince will be missed.