Why Am I NOT Surprised at Eddie Mannis?

#TheMegaBullhornofTruth posted questions about whether Rep. Eddie Mannis was/is really a Republican. He could have proved me wrong.

Instead he sends letter to members of a committee arguing against Rep. Scott Cepicky’s Middle and High School Girls Sports Bill aka the Transgender Bill. When it came time for Mannis to make his case on the House Floor, he remained silent.

Mannis first voted to table the bill and then voted NO. But he kept his objection to a written letter, not a verbal argument when it mattered on the House Floor. 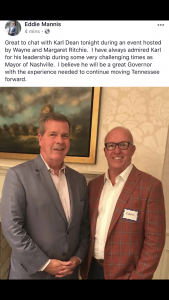 Then last night, he voted against Governor Bill Lee and Republican Leader William Lamberth’s permit-less carry. While in his campaign he professed to be a Second Amendment supporter.

Of course TN Republican Chair Scott Golden and the TN GOP SEC gave the group of bonafide vouchers what they wanted and now the district doesn’t have the Representative that represents the district.