I listened to the first podcast of Almost in Agreement, a Knoxville focused/based podcast by Seth Barber, check out on YouTube here to listen and watch.

Before, I get criticized or before Seth’s gets the hate calls and messages about being affiliated with or even being mentioned on #TheMegaBullhornofTruth (it does happen).

I began blogging in 2004, didn’t begin taking advertising until 2013. Everyone else has come onto the scene since I began, (except Glenn Reynolds and Doug McCaughan needs to come back in, the waters warm)

I am relatively new to podcasting. But I am treating it as another tool in the #TheMegaBullhornofTruth barn.

As the aphorism by popular by President John F. Kennedy, “a Rising Tide lifts all boats.” is why I have no problem mentioning Barber’s podcast, or the podcast of my friends  Krisha and Frank, here. Cause mentioning them may help me and if it does NOT it is the complimentary and kind thing to do.

NOW, about this Barber interview. Knox County Election Administrator Chris Davis was the guest and in the course of a 68 plus or minus minute conversation the topic of City of Knoxville elections came up. The discussion of turnout or lack thereof came up. It made me realize, Knox County Republican Party Chair Daniel Herrera took a hit for saying the Republican Party would be engaged this year. I know the City Council Movement has been engaged the last two elections. Black Coffee Justice will be involved this election. So whichever organization or group can get another 500-1000 people to the polls and spread out over 5 council districts on the ballot in the primary is 100-200 votes could make a difference. 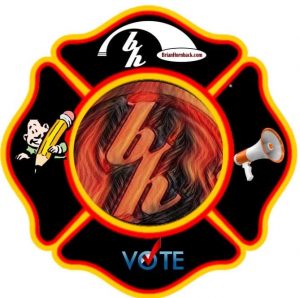 Oh and Davis and Barber didn’t know about the reason Knox County School Board has the Primary and Run-off elections. I will talk about that on my next episode, my YouTube channel here or podcast stream, here or where ever you get your podcasts, cause I’ve been around long enough and as a former elected Knox County School Board member, I know that answer, so rising tide to lift us all up, I will be.