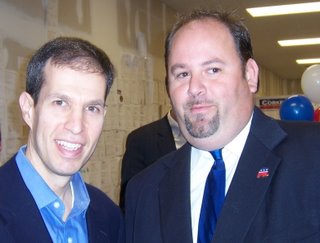 Recently Republican National Committee Chairman Ken Mehlman was in Knoxville. He made a few media appearances, including an interview on the Hallerin Hilton Hill Show on The Big Talker FM 100.3. He also attended a breakfast meeting with volunteers at the West Knoxville Victory office.

The following bio of Chairman Mehlman is taken from GOP.com

Ken Mehlman has served as Chairman of the Republican National Committee since January 2005. When elected, he presented four goals for his term as Chairman: Enact and articulate our reform agenda; Deepen and broaden the GOP so we’re growing our party; Work to elect the best candidates in 2005, 2006 and 2008; and, Institutionalize the grassroots focus.

Before his election as Chairman, Mehlman served as campaign manager for Bush-Cheney ’04, where Michael Barone called him “the structural engineer who turned the plans into reality.” Mehlman served from 2001 to 2003 as White House Political Director. Charlie Cook said that under Mehlman’s watch, “the White House political office has reached the greatest prominence in this administration that it’s ever had.”

Mehlman was National Field Director for Bush-Cheney 2000, where he worked with the campaign leadership in all fifty states and the Republican National Committee to execute winning political plans and mobilize strong grassroots.

Before joining President Bush, Mehlman was Congresswoman Kay Granger’s (TX-12) Chief of Staff and Congressman Lamar Smith’s (TX-21) Legislative Director. He practiced environmental law in Washington and assisted campaigns in Massachusetts, Ohio, Virginia, Texas, and Georgia, as well as the 1992 and 1996 Presidential campaigns.

Mehlman is a graduate of Harvard Law School and received his undergraduate degree from Franklin and Marshall College in Lancaster, Pennsylvania. He is a native of Baltimore, Maryland.

The photo of Chairman Mehlman and Brian Hornback was taken by Suzanne Dewar .