I support Coach Sanders – You Got It Right, Coach! It’s a sad day in Big Orange Country 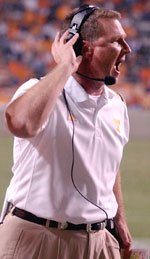 Coach Sanders got it right yesterday. “There is more to life than Tennessee football.” I have gotten more and more frustrated with the call-in sports talk shows, because I didn’t realize that we had so many unemployed NCAA football coaches living in East Tennessee. It is evident that we do, because they all call-in and tell John and Jimmy, Tony and the Swamp Rat. How I can fix it and Coach Sanders can’t.

Ok, he has stepped down. Leave the man alone!

The University of Tennessee Athletics Department announced Monday that Randy Sanders has stepped down from his position as offensive coordinator but will remain quarterbacks coach for the rest of the season. Play-calling duties will be shared by the staff.

Sanders, a Morristown native, was a quarterback for the Vols from 1984-88. He joined the coaching staff in 1989, serving as a graduate assistant, running backs coach and wide receivers coach. He was named offensive coordinator after the 1998 regular season.

“It’s with a heavy heart that I have chosen to relinquish my position as offensive coordinator today. I’ve spent the past 22 years of my life at Tennessee. This place means a great deal to me and always will.

“Everyone has worked very hard this year. No one anticipated us being where we are. Clearly something needs to be done.

“This is a decision I felt I needed to make. Sometimes as a coach changing the lineup on the field can give you a fresh outlook. I’ve never been afraid to make player changes to try to stir things up, and I’m not above changing my situation to stir things up. I hope this will give our team the shot in the arm it needs to get back on track for the rest of the season. I will continue to be involved in Tennessee football as the quarterbacks coach through the remainder of the season.”

“This has been a very difficult season for everyone, especially Randy. By no means is the result of the season any one person’s fault. Randy has dedicated his adult life to this program and is not only a true volunteer and an outstanding coach, but a great friend.

“As circumstances would have it, things have not gone as well as anyone would like. Randy, in a selfless gesture for what he feels is in the best interest of the team, has asked to step aside at the end of the season.

“No one has worked harder or with more dedication through the years. I am sad it has come to this, but also understand the volatile and demanding world of college athletics.”

He and his family, NOW deserve to be left alone.