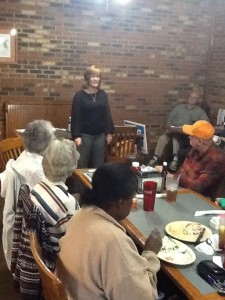 Second District School Board Candidate Jamie Rowe discussed her campaign. She received a compliment from Hubert Smith, radio talk show host and host of CTV’s One on One with Hubert Smith, when he said that Rowe had done her homework. Rowe is on the November 4 ballot with Charlotte Dorsey and Tracie Sanger. 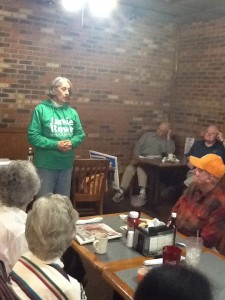 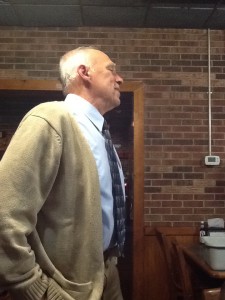 Democrat State Executive Committeeman Cameron Brooks was present and discussed that the state party through a gentlemen Bill Freeman would begin vetting candidates for State Party Chair. Brooks was asked by longtime Democrat activist Norman Riddle if he was aware that State Chairman Roy Herron was present at Thursdays Truman Day Dinner in Knoxville. Brooks said he did. Riddle stated that Herron desired to speak and asked to be able to speak, Herron was denied. Brooks asked who denied Herron the right to speak. Riddle said County Chair Linda Haney and Johnson. Brooks asked Representative Gloria Johnson? Riddle confirmed yes. Brooks said well that wasn’t my call. Riddle stated I hope we are not getting to a point where people are not allowed to speak.

Northwest Knoxville Democrat Club President Susan Jennings did a great job running the meeting and as always it was a pleasure to see and sit with longtime Democrat Activist and MY friend Nancy Stinnette.

Following the meeting I had a good conversation with Sam Brabson, who had a long tenure serving on the City of Knoxville Pension Plan Board. There are FIVE Amendments on the November 4 City of Knoxville ballot concerning the City pension. Vote NO on all FIVE. I will be digging into theses closer to the election.