On Thursday night after I watched the 5 p.m. and before I watched the 9 p.m. Fox Republican POTUS candidate debate, I went to Farragut Town Hall for the only debate between Jason Zachary and his opponent. Zachary was willing and accepted debate dates with the League of Women Voters. But, his opponent along with her campaign manager (according to this Georgiana Vines story refused)

This debate was organized by the West Knox Republican Club, with it’s President Alexander Waters serving as Moderator.

Topic: Gas Tax and the record of Jason Zachary‘s Opponent

Question: What bill will you introduce this next session?

Closing Remarks by the Opponent of Jason Zachary

I missed recording 30 seconds of the debate, it was a rebuttal by the opponent of Jason Zachary in which she slammed AFP. The slam was reported in this Knoxville News Sentinel article written by Gerald Witt.

Below is a picture from the story online. 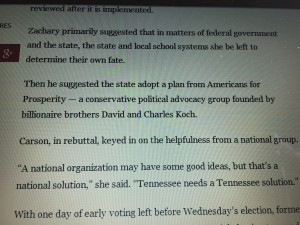