Your Contribution Helps Us Continue Providing Coverage and Potentially Grow

In August and September 2013, I wrote and published two stories based on information from sources. In late September 2013, I received a letter from a lawyer demanding that we correct the information, within 10 days. I checked with my sources and they all stood by what they heard the subject say at the meetings. I declined and in late October 2013, a libel/slander lawsuit seeking $100,000 was brought against me.

In November 2013, my legal counsel answered with affidavits from the sources saying that they heard the subject state what had been attributed to her. In June 2015, legal proceedings and hearings ensued. Several days of depositions and court hearings/conferences were held and then on August 31, 2015 there was a hearing on a Summary Judgement motion filed by my counsel on behalf of me. On September 11, 2015 shortly after lunch, my counsel called to say that he had emailed me the ruling and finding for Summary Judgement.

The court cost were assigned to the the Plaintiff (the one who sued me) however, that does not include my attorney fees. In late August, my unpaid balance with my legal counsel was near $18,000(this is in addition to the retainer paid) While everyone I talk to, I agree with. If a Plaintiff brings a lawsuit and loses, they should pay the defendant’s attorney fees. Unfortunately, that isn’t the way our American judical system works, I have learned.

While I suspect that legal matters like this are an effort to silence the free speech, in my case the free political speech that is not controlled or manipulated by the powers that be that control the main stream media. But, I digress and that is solely my opinion. Opinion is just that opinion.

BrianHornback.Com has been blessed since beginning on August 9, 2004 to be free to all readers. BrianHornback.Com has been blessed since February 2013 to have a few advertisers. BrianHornback.Com has no plans to become a subscription based website. In fact, if I can retire this legal bill. I am looking to pursue a partnership and potentially launch iPhone and Android apps. But, I need to retire my attorney cost. So, if many of you can give a little, the debt will be paid. If you have the ability and can help out, I would be grateful to you. Here is the link to give. Contributions can also be mailed to Brian Hornback P.O. Box 22743 Knoxville, TN 37933-0743 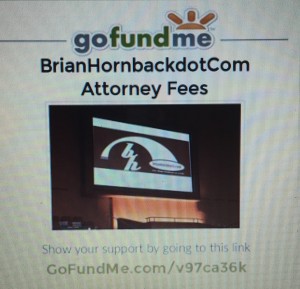