Knox County School Board Has Changed 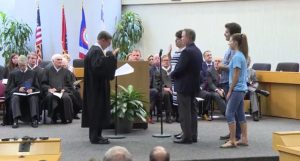 Kristi Kristy being sworn in on August 31