How Diverse is Knox County Commission in it’s Voting for Community Representation?

Tonight the Knox County Commission had a position to appoint on the Air Pollution Control Board. It had to be a citizen that was NOT an employee of the county or city.

Last week, they put out a press release and I posted here because only one person had applied. So, by the time of tonight’s meeting they had one African-American male Mr. Johnson. A white male Mr. Sharp (who at one time worked for Knox County) and a white female Ms. Liddington that just retired from Knox County Air Quality. With little debate and no questioning all three were nominated, on the first vote is was 4 votes for Sharp, 4 votes for Liddington and 2 for Johnson. So the one lone private citizen was eliminated and it proceeded to a vote between Sharp and Liddington. Sharp obtained the appointment by a vote of 6-4. The Commissioner that nominated Mr. Johnson did NOT vote for Mr. Johnson, odd.

Commissioner Evelyn Gill was absent, I understand she was out of town and had a death in the family, which is understandable. Watch the entire discussion and vote on the Air Pollution Board vote, below. 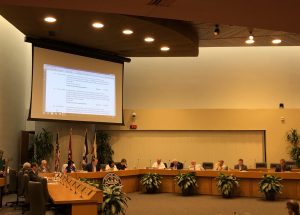 The video is property of BrianHornback.Com no portion of the video can be used without prior permission of Brian Hornback.