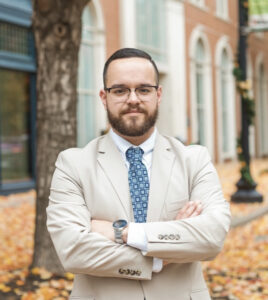 Earley was born and raised in East Tennessee, having grown up in rural Greene County. After obtaining a degree in History from Carson-Newman University, Earley moved to Knoxville where he has proudly served the community through professional mentorship of local college students and pro bono marketing consultation for businesses in Knoxville. Earley is currently completing a graduate program in Strategic Communication through American University. Earley attributes his desire to serve the community to his mother, his most important role model.
The unacceptable abuse of authority displayed by Knox County Mayor Glenn Jacobs and Knox County Sheriff Tom Spangler is a top priority for Earley. Using the powers vested in County Commissioners by Chapter 2 – Article I – Section 2.4 of the Knox County Code of Ordinances and pursuant to T.C.A. § 5-5-126, Earley will move to subpoena:

● Knox County Sheriff Tom Spangler and Knox County Law Director David Buuck for documents and testimony relating to the illegal 287(g) program and the recent arrest of David Hayes–both of which have been vigorously defended by the incumbent.

● Mayor Glenn Jacobs and his staff regarding his threats and interference targeted at the Knox County Board of Health and the Knox County Health Department.
This commitment to accountability is what compelled Earley to run for County Commission. The incumbent has had the power to hold both the Mayor and Sheriff accountable for the last 3 years but has instead turned a blind eye to their abuses and sought their political approval. Knox County voters deserve a Commissioner who doesn’t tip toe around accountability in the name of climbing a political ladder in the county or the city. Earley is proudly fully vaccinated and boosted.