In February 2015, Karen Carson was at Coronado Springs Resort in Disney World on YOUR Tax Dollars

On July 23, 2015 I asked here whether you though Knox County Schools was slow walking a request seeking the travel expenditure/reimbursements of School Boarder Karen Carson. Carson is currently opposing Jason Zachary for the Special Election of State House of Representatives District 14, to replace and fulfill the term of Former State Representative Ryan Haynes.

This past Friday, I sent the request to Knox County Finance Department. Yesterday, I received an email that the gentleman in finance was out of work. But they would work to get the information back to July 1, 2010 (due to a newer finance software system) Today, at 3:47 p.m. I received the information.

Let’s start most current and work our ways back to November 2010.

Two emails attached are interesting, on January 8, 2015 Carson sent an email to the School Board Secretary that said “This is the conference I’m going to. I’ll try to talk to Laurens tomorrow.” I wonder if Laurens is Laurens Tullock and why he needed to be consulted? On January 16, 2015 Carson said “I would like to go to this conference. Can you please schedule? I will be in New Orleans February 6-9 so I will need to fly from NO. Let’s see what they can find for a flight from New Orleans on the morning of monday February 9 to Orlando with a return flight on Wednesday Feb 11 from Orlando to Knoxville. If this creates any budget concerns please let me know and we’ll see what I can work out.” It appears that Carson handled her ticket and was reimbursed. There were two nights lodging at Cornoda Springs Resort in Disney World. Two lunch meals were provided and she was reimbursed for $142.00 for 7 meals. 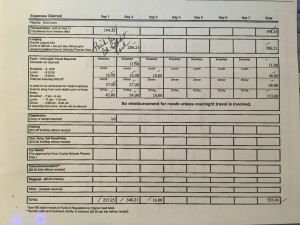 According to the Summary sheet from Knox County Finance since July 2010, there are 13 invoices paid to School Boarder Karen Carson for $7,359.56 (again hotel lodging, air travel and conference fees are mostly but not always pre-paid by Knox County Schools, those are not recorded here)