Knox County School Board, Bus Transportation and Political Cronyism? Is it About the Kids?

This evening the Knox County School Board met and had bus transportation on the agenda after the Disparities in Educational Opportunities Task Force report and recommendations. While I expected the report of the School Bus Consultants and the Knox County Schools laundry list for what the district has done since July 2015. One of which, Russ Oaks kept talking about the Transportation Customer Service Manager. Oaks never identified her, however BrianHornback.Com on January 27, 2016 did here that employee is Kim Sepesi Severance a 2014 Knox County School Board Member. 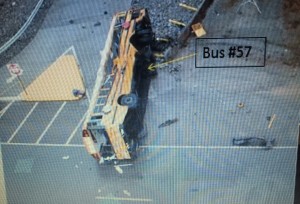 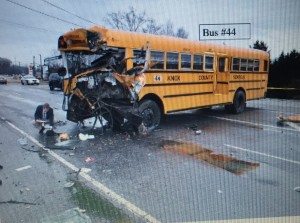 The bus owned by Bob Burroughs that according to the NTSB caused the crash that resulted in the loss of three lives. Photo Source: NTSB Report

The bus that struck the Fawver’s bus and caused the three deaths was owned by Bob Burroughs. As I recall, he surrendered that one contract but maintained his other contracts. I believe that the school district has awarded him another contract since the accident. So, Burroughs has been made whole, back to the same number contracts he had when his bus and his driver caused the accident on December 2, 2014 and took three lives.

Did Political Cronyism Keep the Older Brother in Business?

Today, I asked Knox County School Board Vice Chair Tracie Sanger why in December 2014 were all 5 Fawver contracts taken but Burroughs only lost one. After she checked, she told me that she was told, “Fawver’s was never asked to withdraw their routes. They did that voluntarily. It is her understanding that KCS wanted to take Burroughs contracts away, but we (KCS) were advised by our  law department (Bud Armstrong) that we couldn’t do that.” I then asked Mrs. Sanger if she was aware that the campaign treasurer of Bud Armstrong Knoxville Attorney Keith Burroughs is the younger brother to Bob Burroughs. Mrs. Sanger said, “I was not aware of any of those connections.”