Rogero -vs- Ashe, It is Fun to Watch and I Would Wager any $$$ on Rogero

Anyone that still looks at the Wednesday sales circular wrapper of the daily paper are aware the former Knoxville Mayor has a vindictive, mean spirited bias against the current Knoxville Mayor.

Now, in full disclosure I do not care as I own property in Knox County, NOT in the city limits, NOT in the Town of Farragut. Our Knox County School when the kids were in high school was Farragut High, so I am an Admiral. But, I am a Knox County taxpayer only.

I enjoy watching political battles. Normally, an elected official will simply ignore individuals that write political opinion. However, this evening Mayor Madeline Rogero took to her Facebook Mayor page to direct the 13,654 people that follow her page to a opinion that David Brace with the city had published in the regular daily paper, NOT the sales circular wrapper where they publish the former Mayor. The post had nearly 3 dozen comments and 5 shares when I looked at it after one hour of the Mayor’s posting. Here is Brace’s piece, my apologies if the link is behind the paywall, you know the daily paper has to pay their writers, even the weekly weekly writers get paid $100 a week. 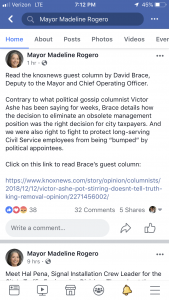