When Partisan Loyalty Ain’t No More

So, back 3 1/2 decades or so ago, party loyalty was a thing. You could get along with members of the other party, but when the Republican Super Majority took over the legislature about 12 or so years ago. I predicted the Republicans might not be able to stay together like the Democrats did.

Lo and behold, 2020 rolls around and the State Republican Chair caves to a freshman Congressman Tim Burchett, a State Senator that moved from a luxurious home to an apartment to be State Senator and Knox County Mayor to place a candidate on the Republican ballot against Gina Oster on August 6, 2020 after having cast a March 3, 2020 Democrat Presidential Preference ballot, contributed thousands of dollars to Democrat candidates and publicly supported United States Senator Marsha Blackburn‘s Democrat opponent and endorsed Governor Bill Lee’s Democrat opponent.

So it seems acceptable to support candidates that are not of your political party. Right? Well here on Twitter is a pic of a sign  for TN State House District 14. 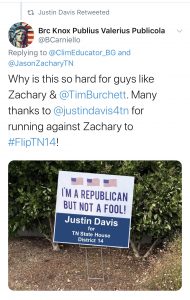 Justin Davis is the candidate opposing Jason Zachary in TN State House District 14 on November 2, 2020. They are both unopposed in their respective partisan primaries on August 6, 2020.