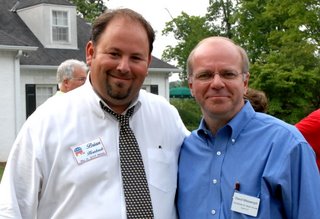 This past Thursday, the 7 th and 8 th districts hosted a Knox County wide Republican Rally. It was a great event, except when a Primary candidate for Governor arrived in the intersection of Emory road and Maynardville Highway.

I had the opportunity to see my friend David Massengill. I met David last year at a party leadership school held in Knoxville. David is the Republican Chairman in Anderson County. David is the Republican candidate (with out opposition in the Primary) for the House District 33 seat currently held by a Democrat. David’s campaign website is located here.

I had requested that David’s campaign send me a copy of this photo. When his sister Maria sent it to me I was reunited via email to a friend from a few years ago. Maria is David’s sister, which improves David’s standing with me and Maria’s husband took the photo.

Any and all Republicans need to support David Massengill. I will be following this race and report more on it as November approaches.