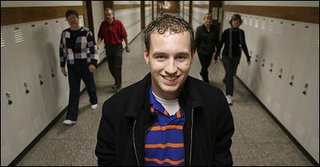 His comments after winning.

After the victory party, came the media appearances

He missed homeroom Thursday to do phone interviews with Michigan rock music stations. He didn’t show up to the middle school where he volunteers as a teacher’s aide because he and his family had been whisked to New York to do “Late Night with David Letterman.”

“He’s been coughing and getting over bronchitis since Saturday,” said his mother, Lorri Sessions, 42, a custodian for a sorority house. “It’s been overwhelming.”

The defeated incumbent in hiding.

Earlier this month, the Toledo Blade in Ohio quoted Ingles, 51, as saying: “How much credibility does an 18-year-old have?”

Enough credibility, to send you packing.

The reaction after the election.

The phones at City Hall have been busy since the tentative election results were announced late Tuesday, with calls from curious residents and pleas from at least three Hollywood studio executives – each of whom wanted to buy the movie rights to Sessions’ story.