Sometimes Reality is Not as Portrayed in Social Media

Three days ago a tweet went out on a twitter account (Jason Zachary had identified the person to me personally as his “sign guy” in a conversation). When I saw the tweet it appeared to be on Westland Drive near Mourfield Drive at the LCUB SubStation. Three days ago, I was traveling from Missouri to Nashville, so I couldn’t be sure. Today, I went and checked it out. The picture in the tweet is not exactly as it is portrayed. First the tweet, 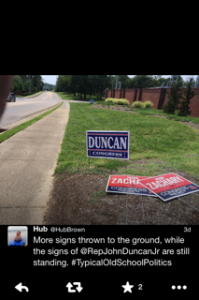 First, I arrived at the intersection via Mourfield Road. After stopping at the stop sign and ensuring that no other traffic was hindered, I took this photo. Then I safely drove into the substation parking lot, got out my vehicle, walked around my vehicle and look what I discovered. I then walk to the sidewalk and look what again I discovered, 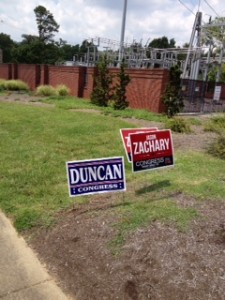 Clearly the new school, we the people is to put two signs that are printed back to back, back to back because the candidate and the campaign are young and apparently still in decorum of grade school. But folks remember signs in right of ways or at electric sub stations don’t vote. Signs on individuals properties with permission indicate that the property owners support that individual. These signs will not influence a vote for or against Duncan, but the amateurish placing of two to every one of the Congressman’s MAY influence a few less votes for the Congressman’s opponent.

Time will tell, as I settle down on a Sunday afternoon, this reminds me of an interesting exchange a few years (ok 11 years) ago and it’s relevance could be tied to the 13 successful elections of Congressman Duncan over his youthful inexperienced immature opponent. Enjoy!

Yes, there is a Mondale reference for ya. Eleven years before you graduated high school, history often times can and will repeat itself.