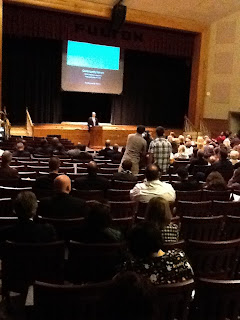 Last night about 250-300 people attended the Knox County Schools Budget town hall meeting at Fulton High School. Superintendent Dr. Jim McIntyre has placed 5 items before the school board for budget cuts. They are
The first citizen to speak was a parent and a custodian. She indicated that the health insurance provided by Service Solutions Company is not comparable to Knox County’s health insurance. She indicated that the deductible would triple. Dr. McIntyre said, yes that the health insurance premiums of Service Solutions is same or lower. However, the deductible is $1,500. The current Knox County deductible is $300.

A Halls Middle School student asked if any in school or out of school activities could be affected by the budget cuts. Dr. McIntyre said that if the school district were to change the use of facilities for organizations. Some organizations may not be able to afford an increase in use of facilities.

A Maynard Elementary parent asked where the Maynard students would go. The answer was Green School.

An out of zone 6th grader at Vine Middle. (Out of zone means that she lives in another Middle School zone but attends the Magnet program at Vine). She said we can’t stand for our school to be closed. It is small but it is superior.

A gentleman discussed that yes enrollment and test scores are down. But it is not unfixable. The myth that our community (center city) does not value education  is not accurate.

A South Knox Elementary parent spoke about the students being absorbed into Dogwood. Dogwood is on the bad list, while South Knox is passing. Any high school could have been used as the STEM high school. So why go to the L&N? Dr. McIntyre said that STEM is an investment. The City’s investment in the lease and federal Race to the Top dollars versus the return is a better investment.

A parent of a West High School student said he was against outsourcing custodial services. “the atmosphere is cut, cut, cut and should be thinking is people, people, people.”

A 7 year teacher at Maynard stated that Maynard has consistently made AYP over the years.

A parent of a Fulton High School student and employee of UT discussed how UT had outsourced to a private custodial service and that they were now in the process of ending that contract and correcting the action. He also discussed that a previous speaker had made reference to a student being raped by an outsourced custodial employee in Putnam County. he said that the offender was a sex offender but was still hired and placed in the school. He went on to ask Dr. McIntyre. “don’t outsource my family” 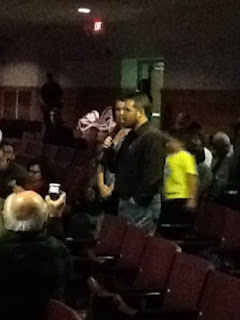