Knox Republican Chair Does an About Face! Thursday is Against Them, Today is For Them Republicans!

On Thursday night, the Knox County Republican Party Chair publicly stated to the Center City Republican Conservatives Club that if we are to ever achieve Elected Superintendent status that we have to vote out Rep. Harry Brooks and Senator Becky Duncan Massey.

One of my sources that attended that meeting called me yesterday to report that she had said this. I then confirmed it with two other sources that were in attendance. Three of the Fifteen attendees acknowledge that she said it.

“I support the elected Superintendent bill. I do not serve on the Education Committee. Ruthie has never talked with me personally about this issue.”

“I will continue to do what I can”

I must say that Senator Massey is the most visible member of the legislative delegation serving Knox County. She returns every call and is very open and transparent.

I left a voicemail for Rep. Brooks last night, I texted him this afternoon. As of 9 p.m. EST on 8/27/2013 I have not been able to speak with him. Within an hour to an hour and a half of my text message to Rep. Brooks. The Knox County Republican Party Facebook page posted this item. 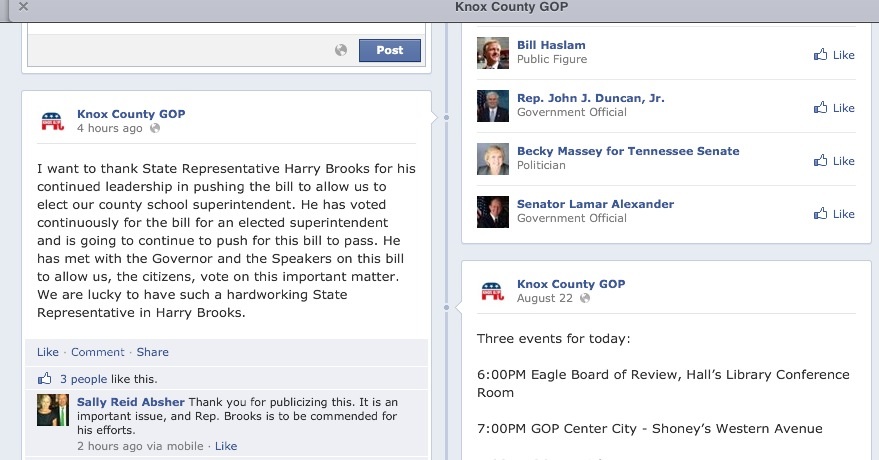 Facebook post thanking Rep. Brooks for his work on Tuesday, when on Thursday she wanted him voted out of office.

Rep. Brooks needs to watch his back. The word out in the Gibbs/Korryton area is that they are planning a Dave Wright candidacy against Brooks. Because he hasn’t participated like he has been told to participate by the ————–. Then again, maybe Brooks has been told he can’t run again by the ————— and he is planning to comply with the group. Time will tell.

A Republican Party Chairman kowtowing to a fringe insignificant group is one thing. But pledging and advocating incumbent Republicans be removed from office? How sad that the power is that necessary to be someone else’s!

Join Our Team of Advertisers! We are the go to source for the the inside story of the news.