A Thought and a Question about Last Weeks “Pride” Coverage

Last weekend in Knoxville apparently was “Pride Week”, Pride Week is apparently an organized celebration of the “alternative” lifestyle. Metro Pulse had a cover story titled “How Gay are We”. In the Metro Pulse was an ad that detailed all the Pride Week activities by day. I found it interesting that all the restaurant events did not include the Bistro at the Bijou. You remember the restaurant that got a lot of publicity for refusing service to Knoxville’s own State Senator Stacey Campfield because of what the owner of the restaurant termed his bigoted view against homosexuals. You would think that the folks with Pride Week would have wanted to honor the restaurant that “stood up for them”. Instead of a West Knoxville restaurant like Big Fatty’s. But evidently NOT!

Secondly, the City of Knoxville contingent that walked in the Pride Parade (apparently this was the first time any city official had walked in the parade) were Councilman Nick Pavlis and Finbarr Saunders, Mayor Madeline Rogero and the two gentleman that are Deputies to the Mayor, Dr. Bill Lyons and Eddie Mannis. Now, with regard to Saunders, Rogero, Lyons and Mannis there is no doubt they are supportive of folks from all parts of our community. They each have some record of being supportive of liberal causes and for that I respect them (while I may not agree with them, I do respect their record of taking a stand) However, what has Nick Pavlis done to support the alternative lifestyle? Pavlis is a guy that has always been associated with the Republican Party (a party that has taken positions against the alternative lifestyle). Many folks in the community have asked, what and why was Pavlis involved? I don’t know the answer to that. 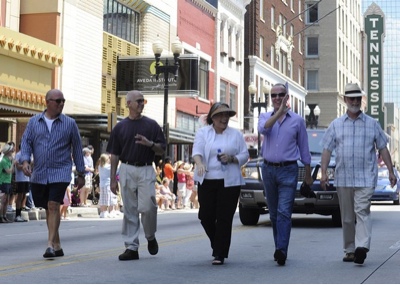