Step Back in Knox County History – 1935 Law Enforcement and Justice

News article from The Knoxville News Sentinel Thursday May 30, 1935 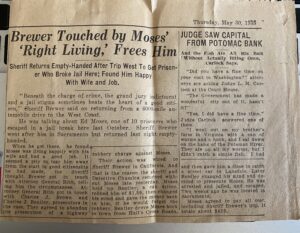 Sheriff Returns Empty-Handed After Trip West to Get Prisoner Who Brome Jail Here; Found Him Happy With Wife and Job.

“Beneath the charge of crime, the grand jury indictment and a jail stigma sometimes beats the heart of a good citizen.” Sheriff Brewer said on returning from a 6000 mile automobile drive to the West Coast.

He was talking about Ed Moses, one of 10 prisoners who escaped in a jail break here last October. Sheriff Brewer went after him in Sacramento but returned last night empty handed.

When he got there, he found Moses was living happily with his wife and had a good job. It seemed a pity to tear him away from the start in good citizenship he had made, the Sheriff thought. Brewer got in touch with Attorney General Bibb telling him the circumstances. Attorney General Bibb got in touch with Charles J. Brown and Charles J. Bentley, prosecutors in the case. They agreed to abandon the prosecution of a highway robbery charge against Moses.

Their actions were wires to Sheriff Brewer in California. And that is the reason the Sheriff and Detective Chumlea returned without Moses late yesterday. Moses held up Bentley, a cab driver, robbed him of $1.50, then changed his mind and gave the money back to him, if he would forget the robbery. Bentley drove Moses back to town from Halls Cross Roads, and then gave him a dime to catch a street car to Lansdale. Later, Bentley changed his mind and decided to prosecute Moses. He was arrested and jailed, and escaped. Two weeks ago he was located in Sacramento.

Moses agreed to pay all costs including Sheriff Brewer’s trip. It totals about $420.

The other article Judge Saw Capital from Potomac Bank, was recently posted here.